A Petition, dated 7th March 2017, was brought by a minor of 15 years of age (at the time of petition) and his parents against teachers and authorities of a public school.  The Child Petitioner was slapped across the face by one of the teachers which resulted in a permanent hearing impairment. The Petitioners argued that the teacher’s act amounted to torture, cruel, inhuman degrading treatment or punishment- as prohibited by Article 11 of the Constitution. They filed an action before the Supreme Court stating that the fundamental rights of the Child Petitioner have been infringed. The Petition succeeded and the Court, in a judgment delivered on 12 February 2021, found that Article 11 of the Constitution had been violated by the teacher and the State. The Court ordered compensation to be paid to the Child Petitioner by the teacher and the State respectively. 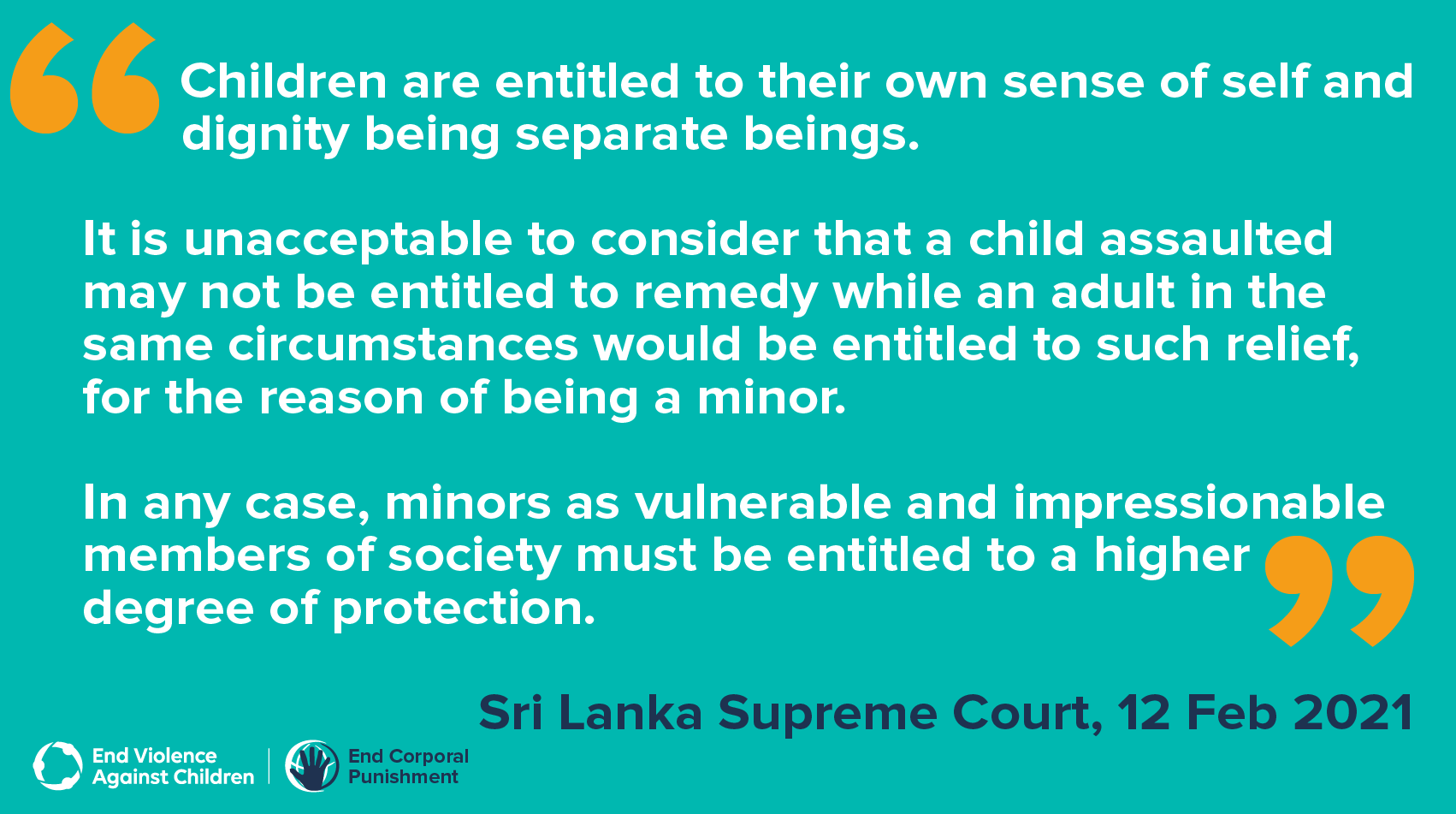 “An individual’s understanding of discipline, respect for rules, a healthy attitude towards a non-violent society are integral attributes that must be instilled from a young age. However, in civilized society, these goals are to be accomplished using alternative forms of discipline which do not inflict physical or mental harm. Sri Lanka as a signatory to the UNCRC has understood the need to curb the widespread use and acceptance of Corporal Punishment.”

Referring to the origins of corporal punishment, the Court stated (page 18):

“…our culture was such that it had a negative view on Corporal Punishment. Corporal Punishment was a prevalent method of punishment used during the colonial era of occupation brought into practice from public school practices from [their] respective countries, thereby trickling into the attitudes and daily practices of citizens of the country…It is indeed an outdated and disproven practice from the western world that we are dearly holding on to.”

The judgment concluded that the use of corporal punishment violated article 11 of the Constitution which prohibits torture, cruel inhuman or degrading treatment or punishment. The judges stated (page 21- 22):

“…while Corporal Punishment does not amount to torture in itself in the instant case, the practice of infliction of physical or mental punishment which disregards the inherent dignity of a child amounts to inhuman or degrading punishment.”

“Children are entitled to their own sense of self and dignity being separate beings. It is unacceptable to consider that a child assaulted may not be entitled to remedy while an adult in the same circumstances would be entitled to such relief, for the reason of being a minor. In any case, minors as vulnerable and impressionable members of society must be entitled to a higher degree of protection.”