Drafting legislation which clearly prohibits all corporal punishment of children involves understanding current law, drafting new legislation which would prohibit, and then taking (or making) opportunities to introduce the relevant bill into parliament and to ensure its passage into law. National advocacy for prohibition should always involve the drafting of concrete proposals for new legislation.

The national Constitution and all other relevant laws and regulations should be reviewed in relation to:

It is important to identify whether domestic legislation contains a legal defence to the use of corporal punishment. All countries have laws making assault a criminal offence but in many states, the law also confirms that parents, and other people acting in the place of parents (in loco parentis), have a right to use “reasonable chastisement”, “lawful correction” or similar defences – assault disguised as discipline or control. In some states this is explicitly stated in legislation; in others, it is a rule established through case law.

As set out by the Committee on the Rights of the Child, prohibition is achieved when:

Simply repealing a defence or authorisation from legislation is a “silent” reform. It does not send a clear educational message to society that corporal punishment is no longer lawful. When the repeal of the defence is accompanied by the insertion of a statement which makes it clear that assault can no longer be justified as punishment or correction, explicit prohibition is achieved.

The key definition of corporal punishment is that provided in the Committee's General Comment:

The Committee defines 'corporal' or 'physical' punishment as any punishment in which physical force is used and intended to cause some degree of pain or discomfort, however light. Most involves hitting ('smacking', 'slapping', 'spanking') children, with the hand or with an implement - a whip, stick, belt, shoe, wooden spoon, etc. But it can also involve, for example, kicking, shaking or throwing children, scratching, pinching, biting, pulling hair or boxing ears, forcing children to stay in uncomfortable positions, burning, scalding or forced ingestion (for example, washing children’s mouths out with soap or forcing them to swallow hot spices). In the view of the Committee, corporal punishment is invariably degrading. In addition, there are other non-physical forms of punishment that are also cruel and degrading and thus incompatible with the Convention. These include, for example, punishment which belittles, humiliates, denigrates, scapegoats, threatens, scares or ridicules the child."

The starting point for achieving prohibition is understanding the current law:

Other key resources include: 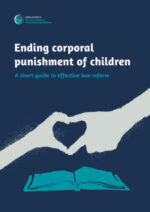