In the academic years 2020/2021 and 2021/2022, Cameroon has witnessed alarming incidents of violent confrontation between students and teachers, some of
which have resulted in loss of life. What is peculiar about this upsurge in violence is that about 95% happen in the course of teachers discharging discipline. Information on the ground suggests that students are beginning to build resistance when teachers attempt to discipline them using corporal punishment. Some come to school prepared with knives and other objects in their school bag while others attempt to abuse substances so as to get high and be ready to face their perpetrators. 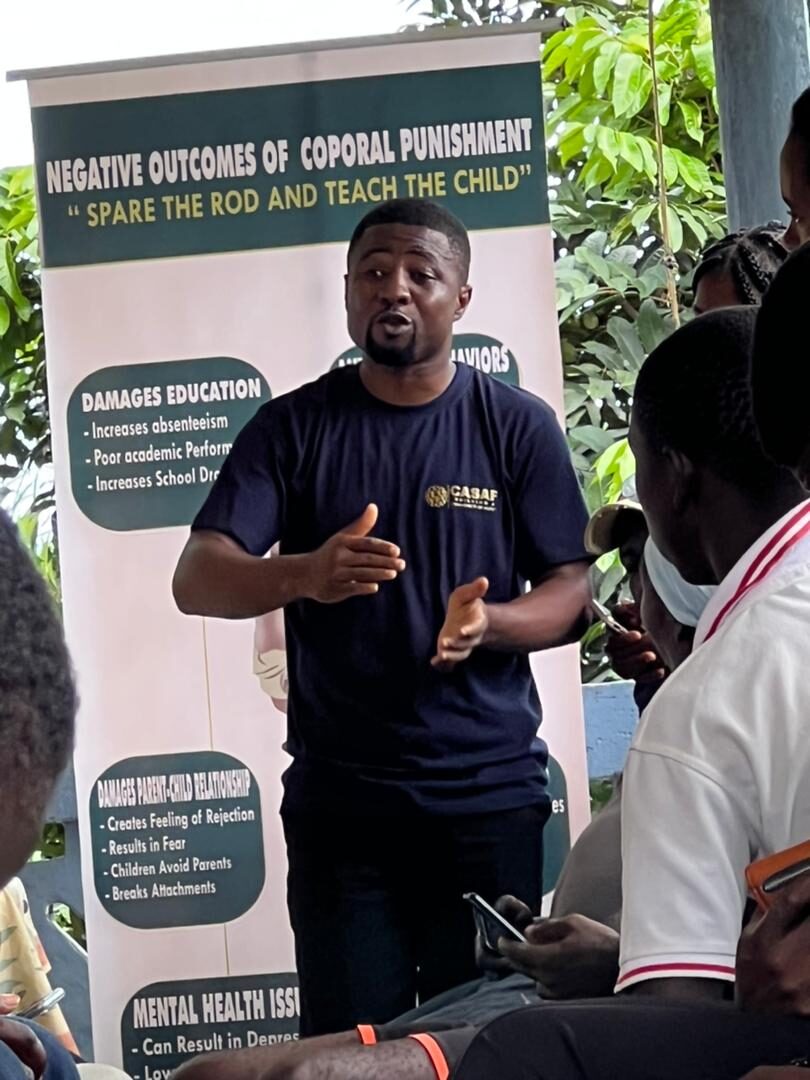 Within the south west and north west regions plagued by socio-political unrest/conflicts, more children have been recruited into armed groups and parents
attribute their actions to substance misuse, but observation shows that the majority of such child militias have straining/negative relationships with their parents and caregivers which are all symptoms of some of the negative outcomes of corporal punishment.

To mark the International Day to End Corporal Punishment on April 30th CASAF-CAMEROON joined the rest of the world in raising awareness about the negative outcomes of corporal punishment and pushing for its abolition at home and schools through the enactment of appropriate legislation that offers children protection by expressly banning its use.

Our principal objective was to challenge existing perceptions, knowledge, attitudes and practices of parents, teachers and care givers while also clarifying the myths they hold about corporal punishment; this involved breaking religious and cultural stereotypes which from every indication is a major pillar supporting the use of corporal punishment in homes and schools.

Our campaign used various channels to send the word out and reach out to as many parents, teachers and caregivers as possible.

In this blog Adolf Mbonyam, Executive Director of CASAF-CAMEROON writes about their campaign to raise community awareness of the negative impacts of corporal punishment for International Day to End Corporal Punishment 2022. 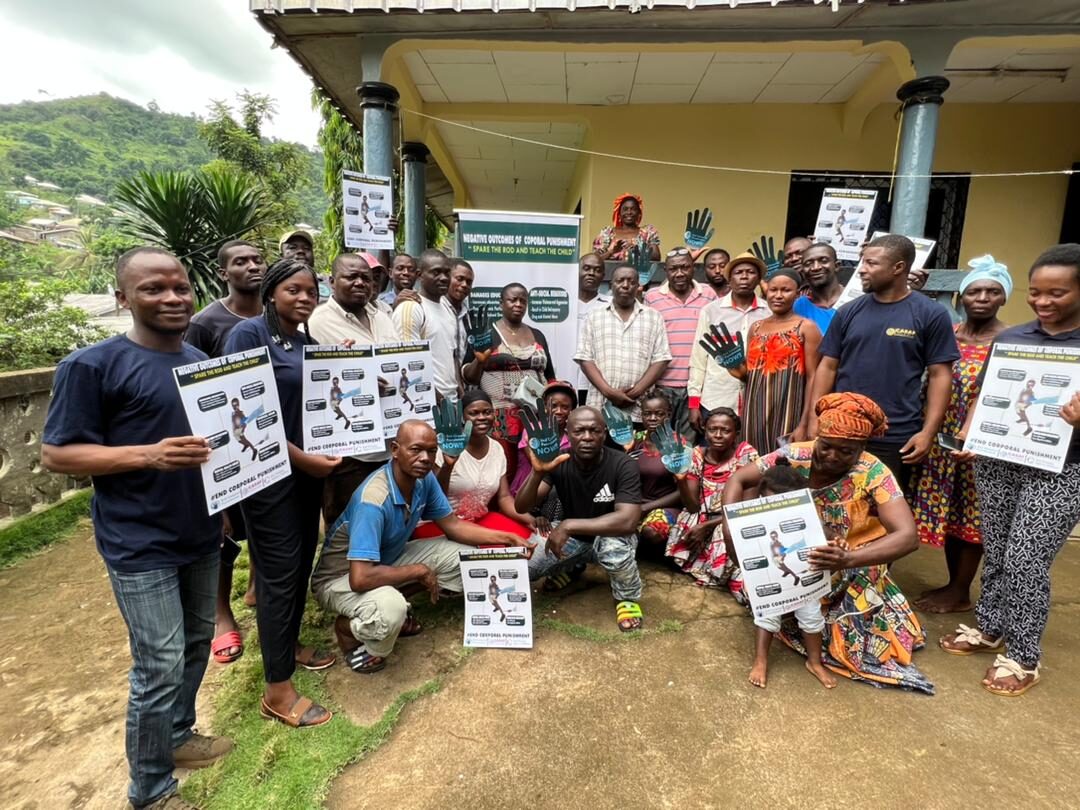 CASAF carried out three community outreach programmes, raising awareness of the negative outcomes of corporal punishment on children. Many participants including mothers and fathers, caregivers and first time parents were wowed by the new
knowledge they were acquiring on the subject, especially the research findings presented. They could vividly see that corporal punishment can cause significant damage to a child’s education, result in physical harm or impairments, increases aggression and anti-social behavior, damages parent-child relationship while significantly compromising both children’s physical, emotional and mental health.

Our greatest joy was that an overwhelming majority asked about other methods of disciplining when our children appear to be on the "wrong track”. We shared some positive discipline techniques such as praise, jointly setting family ground rules, and timeouts amongst others, but emphasis was made that there is need for special sessions to discuss this more.

Flyers were also distributed to the public with accompanying sensitization by our community action teams, and a total of 1500 members of the public were sensitized on the negative outcomes of corporal punishment on children and the benefits of positive, non-violent discipline techniques. 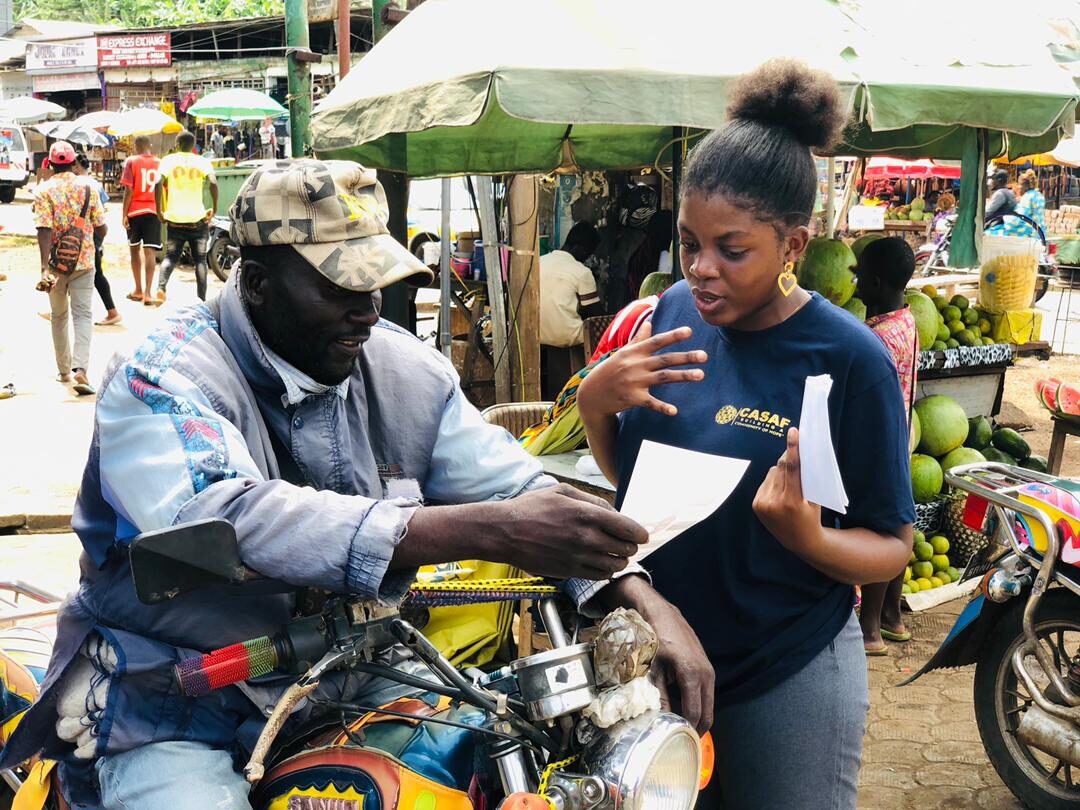 Awareness-Raising on “Prime Media”, a popular TV channel in Cameroon

CASAF also raised awareness of negative outcomes of corporal punishment on “My Media Prime” TV. This was done in “Prime Hour”, a programme watched by millions of viewers. The interactive nature of its programs makes it unique in its genre as viewers have the opportunity to ask questions live about their topics of interest.

The episode coincided with an increase of violent confrontations between teachers and students some of which have resulted in loss of lives. A huge number of viewers intervened through SMS and WhatsApp messages to make comments or ask questions about the correlation between corporal punishment and the heightening incidents of violent confrontations between teachers and students in schools. You can watch the broadcast here.

You can read our country report for Cameroon here.

Visit our page charting progress across the African region here.