Together for Girls has released a new policy brief that analyses the gendered reality of corporal punishment in schools. The policy brief, created with input from the End Violence Partnership, highlights the way students’ experiences of violence in schools varied based on the gender of both teachers and students themselves.

“Our research sought to better understand the interplay of gender with both experiences and perpetration of corporal punishment in schools, as well as attitudes toward its acceptability, through the analysis of data on violence against children,”the policy brief states. “Our hope is that these findings can inform efforts to better understand the relationship between gender and violence in and around schools to promote and ultimately achieve safe, positive, and gender equitable school environments.”

The result of that work is a critical set of statistics, findings and recommendations on curbing corporal punishment in schools by focusing on its gendered aspects.

Among other important data, Together for Girls found:

The policy brief also includes implications for educators, policymakers, advocates and researchers, and stresses the importance of early interventions to end violence in and around schools.

“This research illustrates how corporal punishment is perpetrated and experienced differently depending on gender, and highlights the critical role that violent punishment plays in the realisation – or denial – of girls’ and boys’ right to education,” said Bess Herbert, Advocacy Specialist for Corporal Punishment at the End Violence Partnership. “As well as enacting laws that prohibit violent punishment in schools, it is essential that measures to eliminate corporal punishment, such as teacher training and school policies, explicitly address gender and are implemented without delay.”

Find out more about corporal punishment, girls and gender. 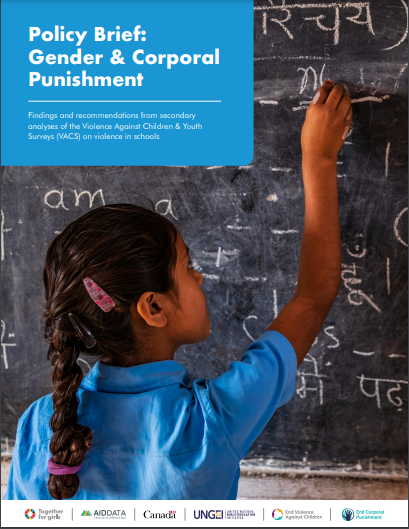