“Parents or individuals who exercise parental authority over children and adolescents have the right to educate, raise and correct their children according to their beliefs and values. The only limit is the prohibition to use physical punishment, cruel, humiliating, or degrading treatment and any type of violence against children and adolescents. The prohibition extends to any other person responsible for their care, in each of the different environments where childhood and adolescence unfold.” (unofficial translation)

Article 2 defines physical punishment as an “action that takes place in the context of parenting, providing guidance or education, where physical force is used with the intention to cause physical pain...” Humiliating punishment is defined as “any action that hurts the dignity of the child or adolescent or cruelly belittles, denigrates, degrades, stigmatizes or threatens them, provided that it does not constitute punishable conduct…” (unofficial translation)

The Law 2089 of 14 May 2021 amends article 262 of the Colombian Civil Code 1883 (as amended 1974), which confirmed the right of parents and other carers to “correct” children and “sanction them moderately”. Article 3 therefore prohibits “the use of physical punishment, cruel, humiliating, or degrading treatment and any type of violence as a method of correction, sanction or discipline” (unofficial translation). The new law will apply to all  children and adolescents in Colombia.

The enactment of the law is a result of several years of lobbying and advocacy from national child rights activists, in partnership with the Government of Colombia. The recent law reform campaign was launched in 2018 and spearheaded by Instituto Colombiano de Bienestar Familiar and other members of the National Alliance against Violence against Children and the CSO coalition the  Alianza por la Niñez Colombiana .

In terms of implementation, the new law requires the Colombian Government, through its relevant departments, to implement a National Pedagogical and Prevention Strategy within six months after the effective date of the law (article 5). The National Pedagogical and Prevention Strategy (“Estrategia Nacional Pedagógica y de Prevención del Castigo Físico y los Tratos crueles, humillantes o degradantes”) will promote the participation of parents to identify and illustrate non-violent education, guidance and disciplinary alternatives and practices.

With this law reform, Colombia becomes the 63rd state worldwide, and the eleventh in the Latin American and the Caribbean region, to realise children’s rights to protection from all corporal punishment.

Colombia is a Pathfinder country with the Global Partnership to End Violence Against Children. This commits the Government to three to five years of accelerated action towards the achievement of Target 16.2 of the Sustainable Development Goals.

We welcome this significant advance for children, and call on the Colombian Government to fulfill its international and regional human rights obligations by taking action to eliminate all forms of violence against children wherever they may be, and in whatever context they occur.

With a child population of 14 million, prohibition in Colombia brings the total number of children worldwide protected by law from corporal punishment to 313 million, or 14% of the global child population. However, a large number of children around the world are still waiting for the realisation of their basic human right to protection from violent punishment, and we call on all remaining governments to enact prohibition as a matter of priority. 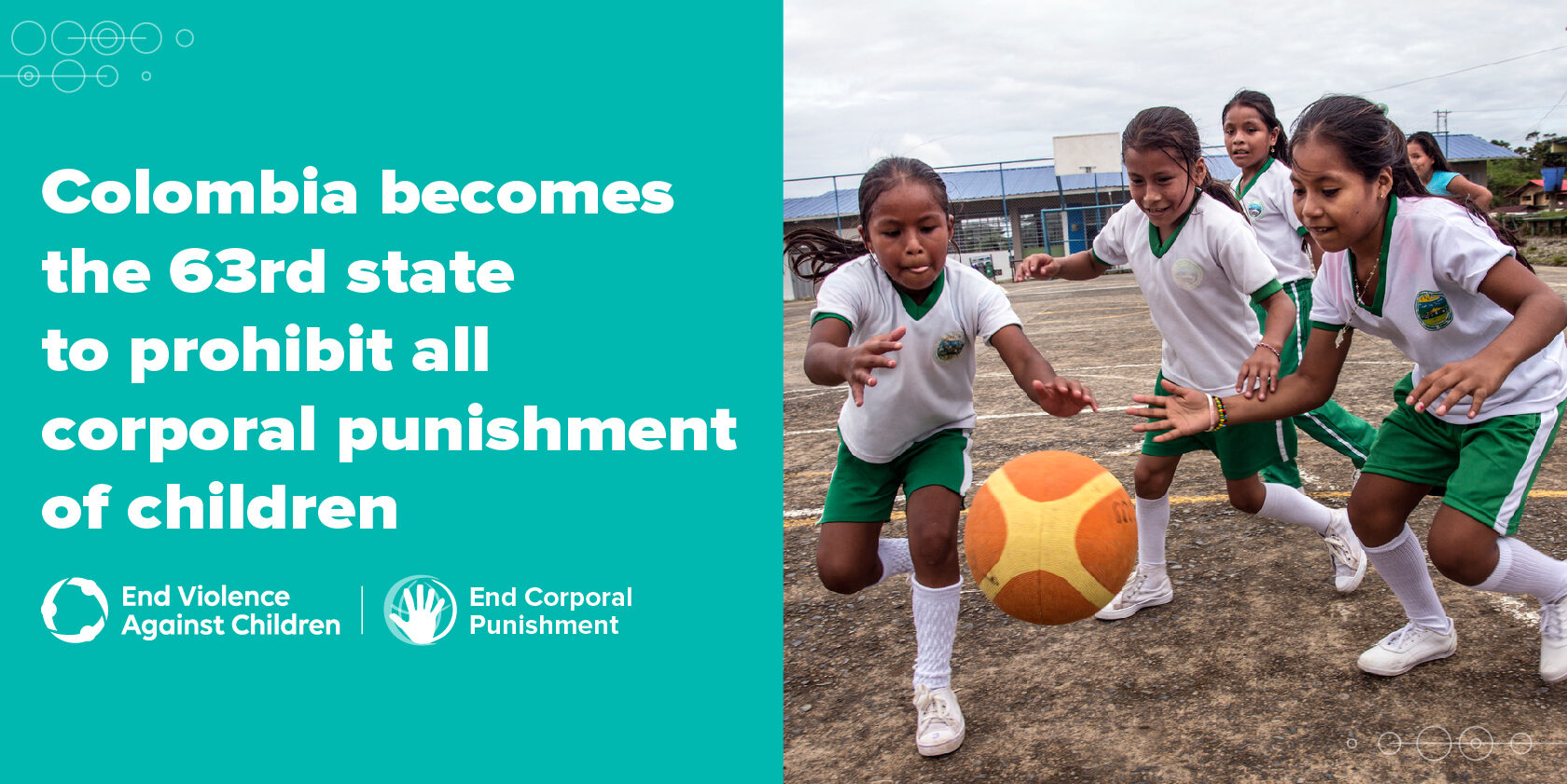 Find out more about global progress towards universal prohibition of corporal punishment.

Find out about implementation of laws prohibiting corporal punishment.

Find this article and resources in Spanish.

Previous PostColombia prohíbe todo tipo de castigo corporal a niñez
Next PostCorporal punishment of children and public health: What does the research tell us?