Corporal punishment - always a breach of children’s human rights - is the most common form of violence against children. Its very widespread social acceptance means that a level of violence in childrearing is normalised, entrenching children’s low status in society and paving the way for other forms of violence and mistreatment. It is associated with a wide range of short and long-term negative impacts, both for the individual and society as a whole.

Two high-level conferences will make the case for accelerating progress towards universal prohibition and elimination of corporal punishment – as a human rights obligation and a moral imperative, but also as an effective and essential foundation for ending all violence against children.

The first on 30th April will look at progress and delay in the global movement to prohibit corporal punishment of children; the second on 4th June will examine how prohibition of corporal punishment can be put into practice, with international examples of leadership and implementation. Speakers will include young people, Governments, human rights, legal and academic experts, and practitioners from around the world. A new report and new guidance will be launched at the conferences.

We are pleased to invite you to the conferences.

Together to #ENDviolence is a global campaign and Solutions Summit Series to accelerate action on violence against children. Find out more

Event #1: Prohibiting all corporal punishment of children: laying the foundations for non-violent childhoods

April 30th is the International Day to End Corporal Punishment of Children, and our chance to call for an end to the violent punishment that is a regular feature of so many children’s lives.

We know change is happening, but not quickly enough for children. Will you join us in speaking up to #EndCorporalPunishment

We are asking everyone - from Governments and organisations to individuals - to sign a statement calling for accelerated action on prohibition and elimination of corporal punishment. 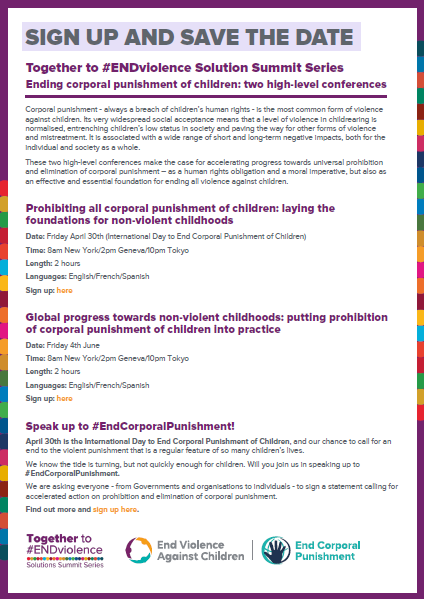 Please circulate information about the events and campaign in your networks, and join us in amplifying #EndCorporalPunishment during April.