African Charter on the Rights and Welfare of the Child (ACRWC)

The African Charter on the Rights and Welfare of the Child (ACRWC) has been ratified or acceded to by 49 African Union member states (June 2019).

The African Charter on the Rights and Welfare of the Child requires states to ensure that children are protected from all forms of torture and inhuman or degrading treatment by parents and others caring for the child (article 16) and that parents and other persons responsible for childrearing must ensure discipline is respects the child's dignity.

Art. 16: “(1) States Parties shall take all appropriate legislative, administrative, social and educational measures to protect the child from all forms of torture, inhuman or degrading treatment and especially physical or mental injury or abuse, neglect or maltreatment including sexual abuse, while in the care of [parent(s), legal guardian(s) or any other person who has the care of the child]....”

Art. 20: “(1) Parents, or other persons responsible for the child shall have the primary responsibility for the upbringing and development of the child and shall have the duty ... (c) to ensure that domestic discipline is administered with humanity and in a manner consistent with the inherent dignity of the child."

Monitoring implementation of the Charter

Implementation of the Charter is monitored by the African Committee of Experts on the Rights and Welfare of the Child (ACERWC). In 2011, the Committee issued a statement on violence against children, in which it stated that notions which accept, tolerate and encourage violence against children, including the acceptance of corporal punishment, should be publicly condemned and eliminated and that it is necessary to incorporate the provisions of the Convention on the Rights of the Child into the domestic laws of each country, particularly in relation to corporal punishment of children.

... The Committee of Experts calls for the firm engagement of African States, at the highest level, to support the eradication of all forms of violence against children. In many countries in the continent, don’t we find that society still tolerates and sometimes condones certain recurrent forms of violence against children, especially in families? However, no tradition, religion, belief, economic situation or educational method should justify these practices.... A clear and unambiguous rejection of all forms of violence, even moderate ones, against children should be encouraged by society as a whole. The notions deeply rooted in the social and cultural norms and traditions which accept, tolerate and indeed encourage violence, including sexist clichés, racial or ethnic discrimination, the acceptance of corporal punishment and other harmful traditional practices should be publicly condemned and eliminated. The harmful consequences that all forms of violence can have on children should be widely publicised.

“... it is necessary to continue to incorporate the provisions of the Convention on the Rights of the Child which guarantee the best interest of the child in the domestic laws of each country, particularly in relation to the deep concerns raised with regards to corporal punishment of children....”

In 2018, the African Committee adopted General Comment No. 5 on “State Party Obligations under the African Charter on the Rights and Welfare of the Child (Article 1) and systems strengthening for child protection”. The Committee highlights that state parties must adopt legislation which prohibits all corporal punishment of children in all settings including the home (para. 5.3.1), and also including in schools (para. 5.3.3) and in penal institutions and as a sentence for a crime (para. 5.3.2), as well as put in place implementation measures (para. 5.3.1).

The Committee expands on its interpretation of article 1, stating that the perpetuation of harmful cultural practices cannot be defended on the basis of custom, tradition, religion or culture and must be eliminated (para. 7.1). All states, regardless of their governance systems and including federal states, have an obligation to recognise and implement the rights in the Charter (para. 5.2). Any retrogressive measures diluting or cutting back on rights already enjoyed are against international law (para. 3.10).

The Committee’s recommendations to states parties

Extracts from the Committee's recommendations on corporal punishment of children can be accessed here by session. Recommendations are also included in the individual country reports.

Extracts from the Committee's recommendations on corporal punishment of children can be accessed here by session. Recommendations are also included in the individual country reports.

Under article 44 of the Charter, the Committee can receive communications relating to any matter covered by the Charter, from any person, group or NGO recognized by the African Union or one of its member states, or by the UN.

The Committee first dealt with the issue of corporal punishment of children in a 2014 decision (Decision of 14 April 2014 on communication No. 003/Com/001/2012, Centre for Human Rights and la Rencontre Africaine pour la Defense des Droits de l’Homme v. Senegal). In this case, the Committee found that the beating of talibés by marabouts amounted to corporal punishment and violated their rights under article 16; Senegal was found in violation of the Charter as it had not adequately protected talibés children from all forms of violence (paras. 65, 67 and 68).

The Committee expanded on this in 2017 (decision No. 003/2017 of 15 December 2017 on communication No. 007/Com/003/2015, Minority Rights Group International and SOS-Esclaves on behalf of Said Ould Salem and Yarg Ould Salem v. the Republic of Mauritania), stating that it “[was] of the view that all forms of corporal punishment should be abolished, either in the home or any other setting”. By failing to protect the complainants from the physical and mental abuse they had been subjected to during their enslavement, Mauritania was found to have “violated its obligation to protect under article 16 of the Charter" (para. 88). 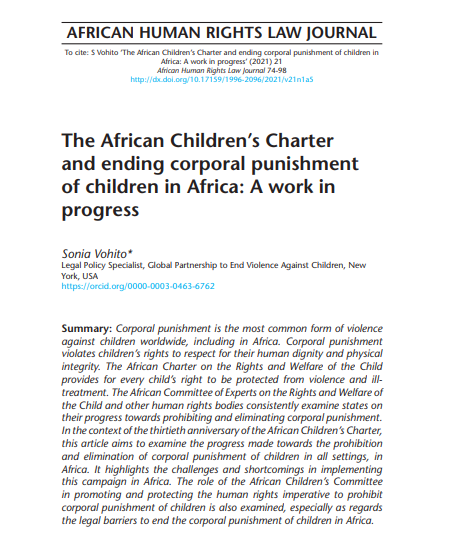 30th anniversary of the African Charter: progress on prohibition and elimination of corporal punishment (2021)