Mauritius has achieved full prohibition of corporal punishment of children with the enactment of the Children’s Act 2020. The new law came into force in January 2022, although it has only recently come to our attention.

With this law reform, Mauritius is the 65th state worldwide, and the twelfth African state to realise children’s rights to protection from all violent punishment.

No person shall inflict corporal or humiliating punishment on a child as a measure to correct or discipline the child.

Section 14 (3) defines “corporal punishment or humiliating punishment” as “any form of punishment which causes pain or suffering to a child through, but not limited to, the use of force or use of substances.”

The Children’s Act 2020 includes sanctions in case of violation: “Any person who contravenes subsection (1) shall commit an offence and shall, on conviction, be liable to a fine not exceeding 200,000 rupees and to imprisonment for a term not exceeding 5 years.”  (Section 14 (2))

The Children’s Act 2020 aims to harmonize the Mauritian legislation with the Convention on the Rights of the Child and the African Charter on the Rights and Welfare of the Child. It repeals the Child Protection Act 1994 and the Juvenile Offenders Act 1935.  Prior to this reform, there was no explicit prohibition of all corporal punishment in childrearing. The Child Protection Act 1994 prohibited the ill-treatment of children but did not explicitly ban all corporal punishment of children.

The Children’s Act 2020 had been in preparation over several years. The law reform process was led by the Ministry of Gender Equality and Family Welfare, the Office of the Ombudsperson for Children, in collaboration with other child rights stakeholders. In 2011, under examination by the Committee Against Torture,[1]  the Government of Mauritius stated that it intended to prohibit corporal punishment of children in all settings. The Government confirmed its commitment during the Universal Periodic Review of Mauritius in 2013 and 2018, and accepted recommendations to do so.

As well as prohibiting all corporal punishment of children the Children’s Act achieved many other important reforms for children. It explicitly prohibits child marriage and repeals existing provisions allowing this practice. The Children’s Act also makes provision to protect children from online violence, exploitation and abuse and criminalizes bullying in all settings. In addition to the Children’s Act 2020, the Children’s Court Act 2020 and Child Sex Offenders Register Act 2020 also came into force in January 2022. 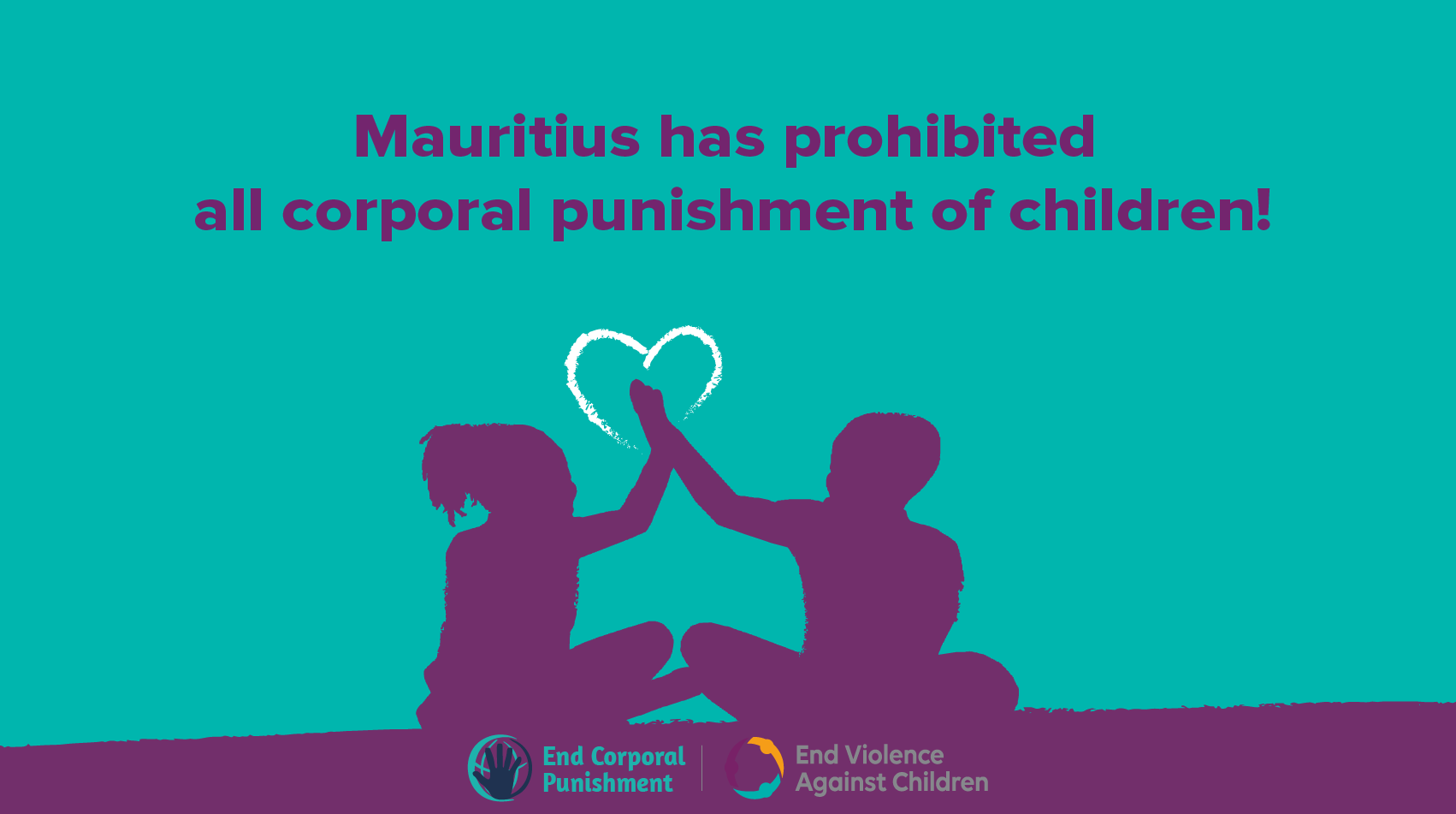 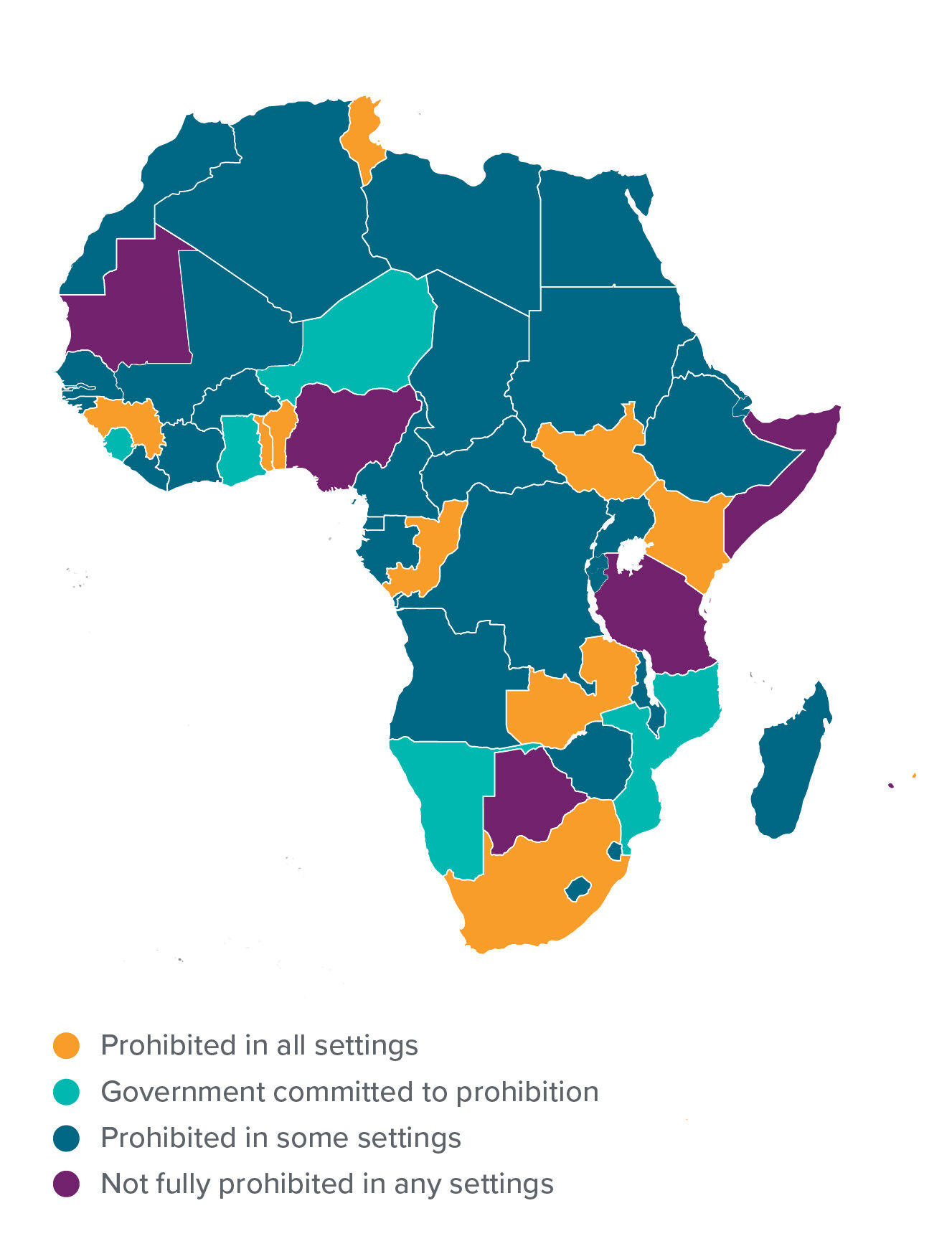 Twelve African states have prohibited all corporal punishment of children

We welcome this significant advance for children and look forward to the development of concrete implementation measures which would enable the Mauritian Government to eliminate all forms of violence against children in whatever context they occur.

With a child population of 270,000, prohibition in Mauritius brings the total number of children worldwide protected by law from corporal punishment to approximately 322 million, or 14% of the global child population.

However, a large number of children around the world are still waiting for the realisation of their basic human right to protection from violent punishment. Considering the global commitment to ending all violence against children in the context of the 2030 Agenda for Sustainable Development, we call on all remaining governments to enact prohibition as a matter of priority.

Read our country report for Mauritius

Read about progress in Africa

Find out about global progress to prohibit corporal punishment

Previous PostCommittee Against Torture issues recommendations to Australia, Somalia and Uganda
Next PostProgress towards ending corporal punishment in 2022